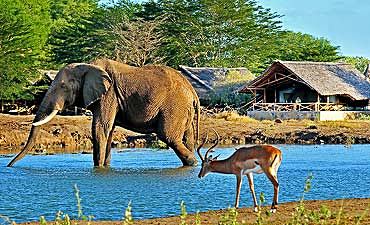 1. How To Logistically Plan & Book An Amboseli-Tsavo-Chyulu Parks Safari For Elephant Watching In Kenya?

If you are arriving into Nairobi and starting off your safari to Amboseli, Chyulu or Tsavo West, you have the option of both flying to the parks, and having your safari vehicle meet you at the airstrip, with the flight routing taking approximately 45-75 minutes depending on the air logistics, or modestly driving for those seeking a cheaper priced safari option.

AfricanMecca customers who choose the option of flying wish to skip the 5-7 hours of drive time each way, depending on their location of their safari lodge or camp in southeastern Kenya. KWS parks entry fees with its corresponding VAT (tax) are paid and purchased ahead of time to make the operations run smoothly and avoid delays.

Once in Chyulu Hills or Amboseli, its poetical discourse comes to play as the vividness of Tanzania’s Mount Kilimanjaro’s magnificence are displayed clearly most early mornings and late afternoons. On a clear day, Mount Kilimanjaro is seen easily from as far away as Tsavo West. The famous parades of elephants to the swamps of Lake Amboseli against the spectacular backdrop of Mount Kilimanjaro are most sought after by photographers. In the drier periods, the shimmering landscape against the dusty elephant’s play and tussle for water deliver the finest sand soaked experiences etched in memory.

With the increase in conservation efforts in Kenya, tribal communities like the Maasai of Amboseli and Waliangulu of Taita-Chyulu have opted to set aside land cushioning the parks for wild viewing (where elephants and other fauna can move in and out of the ecosystem undisturbed) and/or are participating in showcasing their pastoralism lifestyle and hunter-gatherer tracking skills as part of the safari guided experience.

Maasai land bordering the parks in several areas are being protected as private conservancies to allow for an authentic low-density wildlife tour experience which is timely as it lifts the pressure from the main park considering the increase in globalized travel alongside upward financial mobility is leading to more and more numbers in the main Amboseli park.

The top of the elephant safari camp and lodge conservation models can be seen by work done at accommodations like: Ol Donyo Lodge (formerly known as Ol Donyo Wuas), which under the leadership from South Africa based Great Plains, led by the award-winning wildlife filmmakers and conservationists Dereck and Beverly Joubert have relished under the shadows of Kilimanjaro with the conservation of a whopping 275,000-acre conservancy for authentic and exclusive wildlife viewing offering the finest and most wholesome yesteryear safari and wilderness experiences albeit with all the eco-luxuries of the 21st century.

Campi Ya Kanzi located between Chyulu Hills and Tsavo West have a full cultural-eco immersion and interaction with Maasai community with the wildlife viewing either on camp’s 4×4 or walking safaris as a sidekick to your experience. Those bordering the Amboseli ecosystem like Satao Elerai have formed a relationship with the Elerai Maasai community of the Amboseli to earn a lease as a private conservancy which allows for elephant movement in and out of their land as well as income for each and every guest that stays at Elerai Conservancy.

This model works very well for them as it reduces the commercialization aspect of the cultural element for the Maasai – a very proud people, brings dignity to the community, helps the local tribal Maasai community participate directly in the Africa tourism trade in ways more than just being showcased for their traditional dancing and striking red garbs.

The boutique Tawi Lodge in the precincts of Amboseli has also mirrored its conservation efforts in a relationship with the Maasai by setting aside 6000 acres as one of Amboseli’s top private conservancies. The private conservancy experience provides an opportunity for an evening and early night game drive to view the nocturnals as well as observation of wildlife behavior absent during the heat of the day. The rarity of such experiences in Kenya, where the park regulation prohibit after dark activities has been a bonus for those seeking out such experiences.

Touching the original top tier luxury experiences as one moves towards the Amboseli are the likes of Tortilis Camp whose unique location on the western edge of the park allows access to the park on one side as well as the 30,000 acres private Kitirua Conservancy on the other thus maximizing one of the prime viewing spot for elephant safaris in Amboseli ecosystem.

A step down to rustic bush camp option in the private Selenkay Conservancy would be Porini Amboseli Camp or the lesser backpacker experiences of Gamewatchers Adventure Camp. Once inside the Amboseli National Park, its fair play for the larger established lodges and camps like Amboseli Serena, Ol Tukai, Kibo Camp sticking by and to the park rules and concentrating on filling occupancies as a safari accommodation for guests primarily driving into the park from Nairobi and elsewhere.

Other mass tourist focused accommodations located outside the park gates are Amboseli Sopa and Kilima Camp; however, not recommended for specialist elephant safaris.

The standard private conservancy safari in Amboseli would highlight the following activities and experiences during your stay and thus the reason AfricanMecca recommends and selects private Amboseli conservancies for our Premier-Safari Tier 1 and Deluxe-Safari Tier 2 safaris:

With Amboseli being the first choice for guests on tour in the south-eastern portion of Kenya, Tsavo West is mostly the second choice either as a single standalone safari park visit when flying into the park or as a pass-through park on the lower priced safaris returning back to Nairobi or proceeding to Mombasa for a beach vacation. Located in Tsavo West National Park, one of Africa’s largest safari parks, the premier accommodation, Finch Hattons Camp remains as one of the best safari camp in Africa offering the finest experience overlooking a waterhole with resident hippos, freshwater turtles and crocodiles.

The permanent presence of water attracts an incredible amount of birds to the camp all year round. Severin Safari Camp comes in next with its canvas, wood and stone tents and chalets with thatch roofs overlooking the semi-arid grasslands of western Tsavo. Kilaguni Serena offers an alternative safari lodge experience overlooking a waterhole. Several less pricy tour value standards of accommodation are also available most servicing the trip circuit ending up in Mombasa in the likes of Ngulia, Voyager Ziwani, Lion Bluff (Taita-Tsavo) and others.

3. How To Logistically Plan And Book a Tsavo East Elephant Safari From Mombasa On A Kenya Holiday?

If one is arriving into Kenya for a Mombasa beach holiday, your best option for an elephant safari would be best viewed in Tsavo East or Shimba Hills, with the latter being a smaller reserve optimally accessed from the south coast Diani area of Mombasa crossing the Indian Ocean channel via ferry which would require nightly accommodations here. Safaris to Tsavo East or Shimba Hills can be booked between two sets of dates allowing for a bush and beach safari escape during your Kenya vacation.

We recommend a minimum of two night’s safari in Tsavo East to maximize the experience without requiring you to pack up and move again, if at all possible considering game viewing are done early morning to mid-morning and mid-afternoon to early evening with in between lunch, relaxation and wildlife/bird watching in camp. The average minimum drive time from Mombasa’s north coast beach hotels of Nyali, Bamburi or Shanzu to the Tsavo East Park Gate is around 3-4 hours with consideration of the traffic on the main road leading from Mombasa to Nairobi.

4. What Top Safari Camps and Lodges To Book In Tsavo East From Mombasa?

Tsavo East National Park’s proximity to Kenya’s coast makes it a top choice for a safari park on a beach vacation. If you are arriving into Mombasa and are looking to book a meaningful bush and beach safari experience in Kenya, we recommend a two nights stay. For AfricanMecca guests arriving in Nairobi, and wishing to explore the shear ruggedness and beauty of Tsavo East’s elephants either from accommodations like David and Daphne Sheldrick’s Ithumba Camp (a research facility elephant translocation base camp, with pre-arrangement directly with David Sheldrick Wildlife Trust in Nairobi) or the beautiful Galdessa Camp for romantic couples and honeymooners, or the magical Satao Camp where impala are literally residents of the camp, a private charter is required to make the distant flight to Tsavo East possible.

The road journey from Nairobi would be highly unpredictable considering the major traffic on the main tar road leading to and from Mombasa. Our Tsavo East Safari to Satao Camp runs daily as of this writing with game viewing experienced on camp’s 4×4 vehicles. For a combination Tsavo East and Tsavo West, those are best operated on specific weekly departure dates to make the safari prices and drive times into Tsavo West well worth it.

What Are The Top Kenya Parks & Camps For Elephant Safaris?