Are You Planning An African Safari To Ngorongoro In Tanzania? Scroll Down..

Rhino Lodge was formerly the home of Ngorongoro’s first conservator, Henry Fosbrooke, Assistant District Officer of the Loliondo district of the Maasai homeland. It is now an affordable accommodation for visitors to the Ngorongoro Crater on safari in Tanzania. It was Henry who first attracted popular attention to the area with his book “The Eighth Wonder” and began the movement that eventually led to the status of the Ngorongoro Conservation Area as a UNESCO World Heritage Site. Rhino Lodge is a delightfully simple, budget-priced residential accommodation for a safari holiday in Africa It hides on the outer rim of the Ngorongoro caldera, the world’s largest collapsed volcano, which is home to over 30,000 wild animals. Half of these are great herds of bearded wildebeest and zebra, most of which remain year-round within the crater and do not join the Great Serengeti-Masai Mara Migration. Unpretentiously rustic, the lodge does not overlook the crater itself but enjoys glorious vistas of misty montane forest and distant Mount Oldeani. The well-kept grounds are regularly visited by local wildlife. Solitary elephants and Marabou Storks wander across the lawns by day. At night, lion roar and hyena giggles echo nearby. It is a convenient base for a tour in Tanzania with AfricanMecca. You can visit nearby Maasai villages or go for animal watching Ngorongoro Crater trips, where a unique biosphere supports a diverse population of herbivores and predators, including species such as the black rhino which are rarely seen elsewhere, as well as an eclectic treasury of hundreds of fascinating species of birds.

There are 24 simple plain single, double, and triple rooms with double or bunk beds, each with en-suite toilet, shower and hand basin, and a private verandah. All rooms are clean, cozy, colorful, and uncluttered, with wood-burning stoves. Power and hot water are limited because Rhino Lodge operates a careful policy of sustainability to protect the fragile ecology of the conservation area, whilst offering comfortable lodgings for AfricanMecca guests who prefer cherished contact with staff and other guests on their travel in Africa, rather than isolation and pampering in more luxurious surroundings. From Rhino Lodge, you can arrange forest walks and trips to local villages, assured that when you return in the evening, your room will be warm with a welcoming glow from the stove, ready lit by friendly staff to ward off the chill. Hot-water bottles are also available if required, since, at an altitude of over 7,000 feet, the crater rim is often cloud-covered, particularly during the long rainy season. Rhino Lodge supports the Ngorongoro Pastoral Council by employing staff from both the Maasai and Iraqw tribes. Maasai ladies visit daily to exhibit and sell their beautiful jewelry and to demonstrate how skillfully it is made. This in turn creates sustainability for Maasai women led support initiatives allowing for relative independence and flexibility in their daily lives.

On a Ngorongoro Rhino Lodge safari, you start the day early in a 4-wheel drive vehicle with pop-up roof, especially designed for comfortable and unobstructed game viewing. You will enjoy a 20-30 minute scenic drive through the rainforest on the Ngorongoro Crater rim to the steeply winding descent road which drops 2,000 feet onto the crater floor; close by the marshes, the hippopotamus wallow and towards Lake Magadi, a soda lake, fuchsia of thousands of beautiful flamingos are witnessed (read more on best time to visit Ngorongoro Crater & Conservation Area). For six hours, you can explore 100 square miles of varied terrain as your AfricanMecca guide, using his skill and training, and aided by occasional radio contact with coworkers, track some of the prides of lions, huge elephant tuskers carrying gigantic ivory and massive buffaloes. Birdlife includes peculiar posturing Kori Bustards and Secretary Birds, massive eagles, buzzards and kites, ostriches, vultures and tiny, jewel-like weavers, sunbirds and lovebirds. You may lunch dine at allocated sites on your Ngorongoro Crater tour, returning, after your permitted six hours, through the Lerai Forest, where you may see some of the resident black rhino, elusive leopard, Vervet Monkeys and Olive Baboons, before climbing the ascent road which emerges only 5-10 minutes’ drive from Rhino Lodge. Other activity options are very varied outside of the restrictive area of the crater itself (read more attractions around Ngorongoro). It is possible for more active guests to take day hikes or scenic drives through the rain-forests of the rim accompanied by an armed ranger because the wildlife are mostly relaxed and tend to ignore humans in a short distance with little apprehension. The Ngorongoro Conservation Area is designed to provide for the practical integration of human habitation and pastoralism as practiced by the Maasai people, with the protection of wild fauna and flora and the encouragement of tourists on vacation in Tanzania. Outside the crater, you can visit the villages where the Maasai live, or you could go to Olduvai Gorge Museum to see evidence of the emergence of the human species in this original Garden of Eden.

Food at Rhino Lodge is freshly made, good, tasty, filling and well-prepared but mainly locally inspired, an enjoyable novelty on an African tour. Many dishes use coconut milk, peanuts, cassava, rice, maize, plantains, okra and peas. Meats and fish are often grilled by expert marination to make them tasty, and much use is made of spices and Swahili-style curries. You will dine with other guests amidst friendly managers and serving staff in a communal dining-room decorated with ethnic wall art, which features a central fireplace and an extended decking. Another huge canopied hearth with comfortable settles makes for a relaxing lounge venue for evening socialization. There is also a small bar and mini-library stocked, interestingly, with a number of rare old books on African safaris and the history of the area, the tribes-people and the Ngorongoro wildlife. Most food is bought from local suppliers in the Karatu town and includes fruit, vegetables, cheese, meat, fish and poultry. Salads, soups, roasts, grills and desserts are available, supplemented by a wide variety of soft drinks, beers, wines and spirits to order. Fine tea, coffee and chocolate drinks are also provided, and special diets can be supplied by arrangement via AfricanMecca.

PLACES TO STAY IN NGORONGORO

Confused and overwhelmed? Read where to stay in Ngorongoro based on Safari Tier Rating 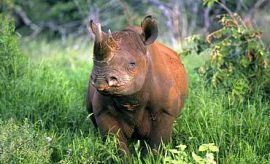 Curious about Ngorongoro? Read more on safari experiences, tour activities, what to do and more

When staying at Ngorongoro Rhino Lodge in Ngorongoro Crater (Rim & Forest Areas), we recommend combining it with your Northern Tanzania safari to Tarangire, Lake Manyara and Serengeti (wildebeest migration). End your trip with a Swahili cultural tour and beach holiday in Zanzibar.

ARE YOU PLANNING TO BOOK AN AFRICAN SAFARI TO NGORONGORO CRATER IN TANZANIA?

HAVE YOU VISITED NGORONGORO FOR AN AFRICA SAFARI IN TANZANIA?