Are You Planning A Tanzania Safari To Lake Manyara? Scroll Down..

Lake Manyara National Park is one of the smallest safari parks in Tanzania, but encloses within its numerous microclimates a diverse range of landscapes and animal populations which mirror those of many different parts of Tanzania in miniature. It is easily reached in 90 minutes from Arusha by road as a convenient stop-over between rival African wilderness destinations at Ngorongoro and Tarangire.

Between the cliffs and the eponymous soda lake, which extends around 30 miles (50 kilometers) along the base of the 500 meter high East African Rift Valley escarpment, home to impudent rock-climbing klipspringer and diminutive dik-dik, there is a narrow belt of acacia woodland and area of grassland which changes seasonally from short, rich grazing lawns to golden, dry grass savannah.

When green, it is colonized by wildebeests, warthogs, Cape buffalos and zebras, and when it is dry, ostrich, elephant and giraffe can be seen, the latter so dark in coloring as to look almost black in the distance. Blue and vervet monkeys, giraffe, and elephant feed in the acacia and mahogany woodlands but wander out to the saltlicks around the receding lake. Lions also sleep in the forks of the acacia trees, an unusual behavior prompted by their environment.

Elephants, researched in the park by Ian Hamilton as part of the earliest conservation projects from 1975, are more numerous here too. They travel in extended families with dozens of grandmothers and mothers, co-operatively protecting their offspring, the smallest of which actually walk under their mothers’ bellies, safe from predators and for a quick feed.

An exploration tour of Manyara can be accomplished in a day, spotting hippos in the north and south of the lake, with hundreds of bird species, especially waders and migratory flamingos, on the shores, and thousands of ungulates and distinct primates in the woodlands: notably stately waterbuck, spiral-horned impala, black and white Colobus monkeys with their perpetually surprised white eyebrows; and numerous baboons, grooming each other by the roadside in affectionate family groups whilst aggressive sentinel males strut, tails raised high to “moon” showing shiny warning bum patches.

In the groundwater forest, more fascinating birds, keening crowned eagles, squawking hornbills and clucking crested guinea fowl add to the shrilling cacophony of myriad stridulating insects. The park is entered from the north, and prior to the gate arrival, you will pass through the rural market town of Mto wa Mbu, where remnants of dozens of indigenous Tanzanian tribes who have traded and warred in the area prior to the colonial era, including Maasai, Iraqw, Mgubwe, Chagga, Gorowa, Tatoga and Irangi, now live in harmony.

These provide cultural and historical insights to enthusiastic AfricanMecca tourists on their dream vacation in Tanzania, who will encounter a unique fusion of the four basic African language roots: Nilotic, Cushitic, Khoisan and Bantu, although Swahili and English are almost nationally and universally spoken and understood. 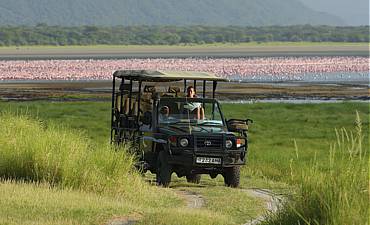 WHERE TO STAY IN LAKE MANYARA

Accommodation in Manyara varies based on the experience and location sought. Some are located inside the park in the southern expanse while others are sited on the rim of the Rift Valley escarpment.

An adventurous Lake Manyara safari offers various activities to meet your specific interests. You may enjoy mountain biking, fly camping, horse riding, walks in a private wilderness to game drives in the park.

Lake Manyara is a beautiful place to visit all the year round; though. the dry season of July to October is the best time for watching game that comes to Manyara from other ranges as water sources dry up.

When visiting Lake Manyara (Great Rift Valley Lake), we recommend combining it with your Northern Tanzania safari to Tarangire, Ngorongoro Crater and Serengeti (wildebeest migration). End your trip with a Swahili cultural tour and beach holiday in Zanzibar.

ARE YOU PLANNING TO BOOK AN AFRICAN SAFARI TO LAKE MANYARA IN TANZANIA?

Do You Need Knowledgeable, Experienced & Specialist Guidance For Your Travels In Lake Manyara ? Let Us Help Plan Your Trip Itinerary Correctly

HAVE YOU VISITED LAKE MANYARA FOR AN AFRICA SAFARI IN TANZANIA?