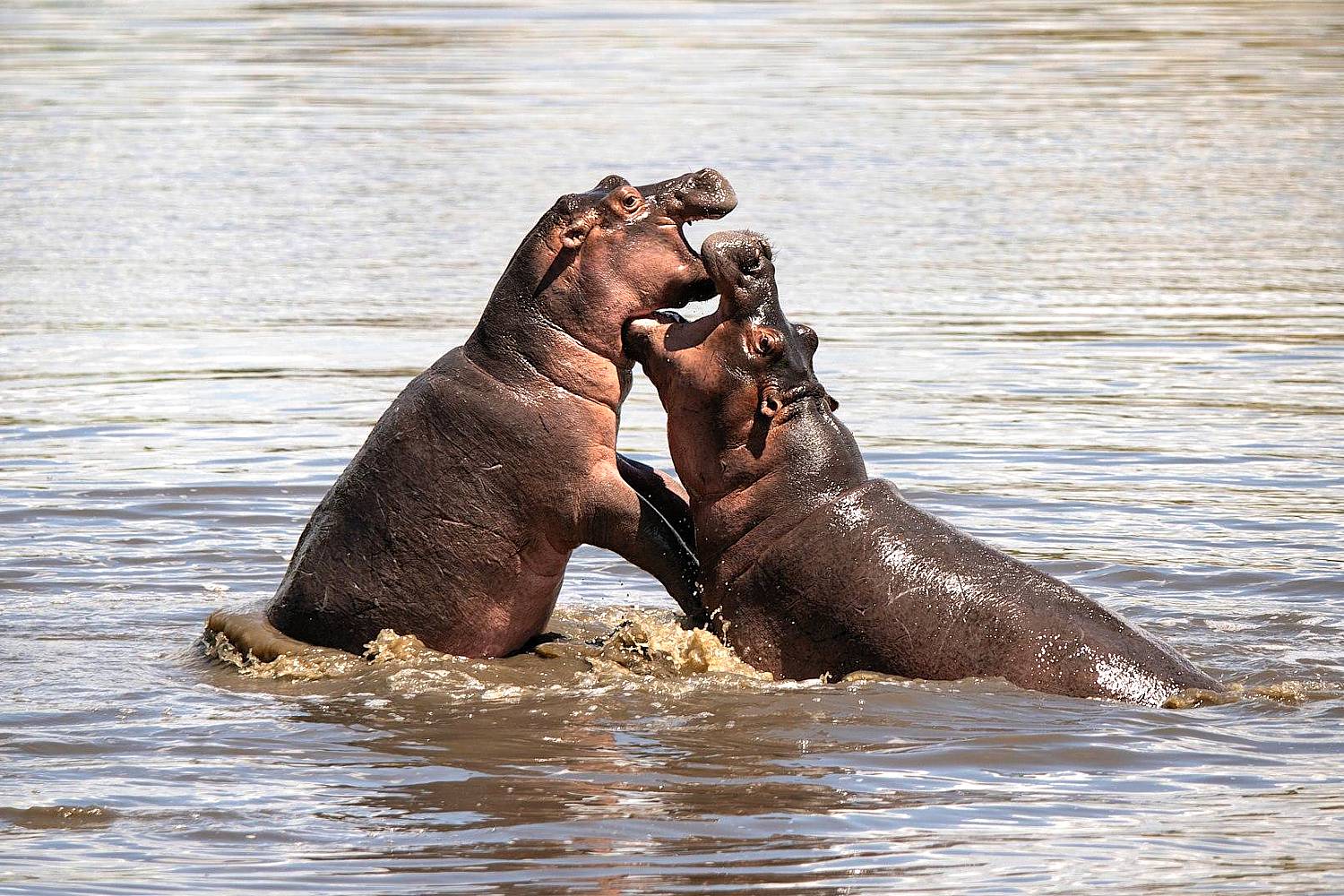 Are You Planning A Wildlife Safari To Tanzania? Scroll Down For Details..

GUIDE FOR WILDLIFE SAFARIS IN TANZANIA WITH AFRICANMECCA

READ MORE ON TRAVEL GUIDE FOR TANZANIA
What do you want from your dream safari in Africa? Beautiful scenery? Fantastic wildlife? The ultimate freedom of returning to primeval forests, soaring mountains, timeless lakes, endless plains? You can have it all when you sample the diverse wilderness experiences on an exploratory wildlife safari in Tanzania with AfricanMecca. Where do we start?

Thrill to an endless surge of hoofs and horns across the Serengeti plains as the Great Wildebeest Migration presents the spectacle over a million ungulates pouring down the northern banks of the Mara River to be seized by ravenous crocodiles or picked off by predators as they emerge exhausted from the crossing. Alternatively, even experience live births of over half a million wildebeests in a three-week outburst on the southern plains of Ndutu, Masek and Kusini.

Equally ferocious but more remote and untouched western Tanzania outback, Katavi presents the spectacle of thousands of crocodiles and hippopotamus clambering over each other in an attempt to find a place in one of the muddy wallows that is all that remains when the dry season diminishes life-giving swamps and rivers like Katuma. Follow territorial lions and the elephant migration in a 4x4 game-viewing vehicle on a northern Tanzanian tour of the Tarangire or find the tree-climbing big cats of Manyara.

There, too, you will be entranced by thousands of migratory pink flamingos on the edge of a beautiful soda lake. The healthiest elephant herds roam the southern Amboseli plains near western Kilimanjaro bordering Kenya’s Amboseli National Park, while Tanzania’s only coastal safari park – Saadani offers a combination bush and barefoot beach escapade with sea-safari opportunities in its azure waters.

Black rhinoceros, an endangered mammal species in Africa, can be found on northern expedition trips to Ngorongoro Crater and Serengeti while Selous in the south offers a vast, unexplored wilderness, harboring large populations of elephants, giraffes, buffalos, zebras, hippos and crocodile. Endangered African wild dogs prowl the southern parks of Ruaha and the Selous together with leopards and wide-ranging animals like cheetahs similarly threatened by curtailment of their ranges.

The southern safari can be combined with a visit to Mikumi and Udzungwa Mountains National Parks too. At Gombe Stream and the Mahale Mountains, troops of wild chimpanzees have been habituated to the presence of human beings for over 50 years of research by Dr. Jane Goodall and the Dr. Toshisada Nishida so that you can venture close enough to chimp communities to watch their social interactions on your African primate tour.

Personalized bush travels in Tanzania are a bird-watcher’s paradise with over 1100 confirmed species. In the northern park of Tarangire, gem-like sunbirds, weavers, bee-eaters and lovebirds are plentiful just after the rains. Further south in Ruaha and Selous, waders and river dwellers abound, including fish eagles, kingfishers and skimmers along the Rufiji and Great Ruaha Rivers. Grassland and forest species such as ostrich, woodpecker and kori bustard are found on AfricanMecca birding safaris in Ngorongoro and Serengeti.

Most avian novices will bag more than hundred checklist ticks on a single trip to a Tanzania wildlife holiday location. Freshwater fish abound in Lake Tanganyika where over 250 species of brilliant cichlids have evolved. Snorkeling and PADI diving are popular in the coral reefs of the Indian Ocean around Zanzibar, Mafia and Pemba Islands. Deep sea fishing for marlin, barracuda, wahoo and shark is an exciting East African marine vacation activity. Whatever your Tanzanian wilderness safari involves, AfricanMecca can make your dream a reality.

What do you want from your dream safari in Tanzania? Beautiful scenery? Fantastic wildlife? The ultimate freedom of returning to primeval forests, soaring mountains, timeless lakes, endless plains?

The best way to ensure a discerning safari in Tanzania is to engage AfricanMecca in organizing a customized tour, tailor-made with an option of a private guide and exclusive transport just for you.

AfricanMecca has the bespoke expertise and experience in hand-picking small, romantic accommodations in pristine safari destinations that results in superlative dream honeymoon safaris of Tanzania.

A family safari binds you together in shared gratitude and wonder. Parents and grandparents sharing a Tanzanian wildlife and cultural safari with their generational children is an enriching experience.

The supreme safari luxuries of Tanzanian wilderness experiences are never to be forgotten self-indulgence on a spectacular scale. Each rustically boutique camp offers something differently richer.

An AfricanMecca photography safari in Tanzania puts you in the care of a hand-picked photographic instructor so that you will learn how to get the very best out of your camera during your game drives.

We believe the cultural diversity of Tanzania is one of its greatest strengths. By meeting and understanding people whose views and values are very different from your own, you acquire new insights.

The most popular primate safaris in Tanzania with AfricanMecca are in Gombe and Mahale, sites of intensive studies of chimpanzees, mankind’s closest living genetic kin with 95-98% of DNA in common.

Walking safaris in Tanzania embraces you with the landscape and the wildlife, disturbing it as little as possible, and becoming just another animal, alert and aware of every nuance of wilderness.

Tanzania is one of the best bird watching destinations in Africa, with over 900 resident species and 200 migrants present. Birding is best in the rains for migrants and residents in breeding plumage.

Horse riding safaris in Tanzania are conducted in private wildernesses, yet it is a distinct way to immerse yourself with the pristine landscape, diverse wildlife, fauna, and the indigenous people.

A balloon safari in Tanzania is a fantastic once in a lifetime experience, particularly suitable for a bird's eye-view game viewing experience on your wildlife tour in Serengeti and Tarangire.

The awesome beauty of Tanzania offers many venues for a dream wedding. Have your bridal vows in the bush with nature's bounty all around. Confess with AfricanMecca Safaris to make every dream come true.

Tanzania is a spectacularly salient country with varied landscapes and ecological diversity of flora and fauna, from avian, terrestrial to marine, coupled with castaway experiences on soothing turquoise shores.

Review Tanzania detailed itineraries and prices of our recommended safaris with the option of customizing your Africa tour based on your preferences and needs.

Review details on the best time to go to Tanzania to visit its various wildlife outback, lakes, rivers, beaches, islands, mountains, forests and other wildernesses.

Review Tanzania's unspoiled white, sandy coastal beaches and idyllic islands backed by tropical forests that are lapped by the azure waters of the Indian Ocean.

Review city tour recommendations on full or half day options in Dar es Salaam, Arusha, Zanzibar. Experiences can be customized around your vacation travels.

When visiting Tanzania, we recommend combining your safari to Serengeti, Ngorongoro Crater, Tarangire and Lake Manyara. You can also day trek or climb the highest mountain in Africa - Kilimanjaro.

You may optionally extend out to Southern or Western parks like Nyerere (Selous), Ruaha, Katavi or Mahale - Gombe ending with a beach vacation and Swahili cultural tour in the exotic spice island of Zanzibar, Pemba, Mafia or Fanjove.

ARE YOU PLANNING TO BOOK AN AFRICAN SAFARI TO TANZANIA?

Do You Need Knowledgeable, Experienced & Specialist Guidance For Your Travels In Tanzania? Let Us Help Plan Your Trip Itinerary Correctly

HAVE YOU VISITED EASTERN AFRICA FOR A SAFARI IN TANZANIA?