Are You Planning A Tanzania Safari To Tarangire? Scroll Down..

Tarangire National Park in northern Tanzania is not as well branded as a safari holiday destination in Africa as Serengeti or the Ngorongoro Crater, but the tributaries and swamps of the Tarangire River provide permanent water sources when surrounding shallow lakes dry up, thus attracting a migratory movement of up to 250,000 mammals during the dry season from June to October with a more varied mix of ungulates.

In particular, an estimated 5,000 to 10,000 of elephants are on the move, an epic event unrivalled in other areas. Hump-backed wildebeest, kongoni with long ears and short horns reminiscent of a samurai headdress, hulking buffalo, buxom zebra, delicate gazelles, watchful eland, ostrich outriders, fringe-eared oryx and an array of attendant predators move in and out of the park in different directions at different times. Spectacular are the season density wildlife populations undoubtedly, but the most astonishing features of a nature tour of Tarangire Park are its giants.

Set in an ecosystem ten times larger than Lake Manyara Park, consisting mainly of less rigidly restricted Conservation Areas, it is owned mainly by the Maasai people. Development is encouraged with a balance of eco-tourism and wildlife protection, whilst maintaining the cultural identity of indigenous populations. Large numbers of giraffe, lesser kudu, warthog, impala, waterbuck, and dik dik remain in the park all year round, with many predators, including the tree- climbing lion, cheetah and python which are usually seen lying in ambush for their prey along stout horizontal tree branches.

Round-eared, white-tailed African wild dogs, once believed extinct in this area, also hunt the Southeast plains. Miniature termite mountains of red earth cement attract nocturnal ant-eating aardvark, and also pangolin that can roll itself into armored balls, as well as lively mongoose, cuddly hyrax and a plethora of brightly colored lizards, together with dueting red and yellow barbets, representatives of up to 550 bird species that make the Tarangire a bird-watcher’s Paradise. Not least of the wonders of the area are thousands of insects that display themselves around night-time lanterns.

Admittedly, it is commonsense to protect yourself against mosquitoes, but the wonderful shapes and markings of butterflies, beetles and moths more than compensate. Hauntingly ghostlike silk moths, brilliantly marked green flatid bugs, and bizarre but beautiful oleander hawk moths, like camouflaged alien fighter planes, make the “magic” lantern a hypnotic nocturnal display on your safari in Tanzania with AfricanMecca. 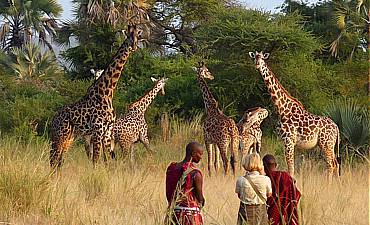 WHERE TO STAY IN TARANGIRE

Tarangire accommodations come in two main types, lodges and tented camps, and in three Safari Tiers from super luxurious to cost-conscious, each providing its unique offerings to AfricanMecca guests.

Set out on a Tarangire bush walk, intermingle and learn about Maasai communities or opt for a game drive, in comfortable, custom-built 4WD vehicle, with all-round viewing - open sided or pop-up roof.

The best time for a Tarangire safari is from June to October during the dry season when migrant game from elephants to hoofed herbivores congregate around the swamps and the Tarangire River valley.

Try an early morning take-off in a hot-air balloon, floating soundlessly above the treetops for a unique perspective on herds of elephant, unmoved by your presence, and zebra chased by furtive lions.

When visiting Tarangire National Park, we recommend combining it with your Northern Tanzania safari to Lake Manyara, Ngorongoro Crater and Serengeti (wildebeest migration). End your trip with a Swahili cultural tour and beach holiday in Zanzibar.

ARE YOU PLANNING TO BOOK AN AFRICAN SAFARI TO TARANGIRE IN TANZANIA?

Do You Need Knowledgeable, Experienced & Specialist Guidance For Your Travels In Tarangire ? Let Us Help Plan Your Trip Itinerary Correctly

Guide For Lodges & Camps In Tarangire

HAVE YOU VISITED TARANGIRE FOR AN AFRICA SAFARI IN TANZANIA?