Serengeti National Park is home to some of Africa’s most iconic species, making it an exceptional year-round safari destination. The immense energy of the area is tenfold when the wildebeest migration traverses specific areas on an infinite course to search for food and water. The herds arrive in northern Serengeti from July to October and southern Serengeti from December to March.

Kimondo Camp accommodates bush travelers who want to witness the migration firsthand by offering two mobile sites in Serengeti National Park – one in the north and one in the south. It was previously known as Serengeti Mara Camp and Olakira Lamai Camp before rebranded to its new name by Asilia Africa since it now also operates in the south of Serengeti. Both seasonal locations offer impressive observation of the Great Wildebeest Migration. The north camp is located in the remote and unique Lamai Wedge Sector - north of the Mara River, around 10 minutes away. The Lamai Airstrip is 60 to 90 minutes away allowing you plenty of game viewing opportunity during airstrip transfers.

The Lamai Wedge, so-named for its location is wedged between the Mara River on the southern side, the Northern border of Kenya’s Masai Mara and the western Siria escarpment is considered to be one of the most beautiful, secluded and remotely scenic parts of the Serengeti ecosystem, often referred to as the “melting-pot of wildlife” because of its rich ecosystem, spectacular vistas, abundant presence of wildlife and the best spot for the “Mara River Crossings” during the wildebeest migration season from July to October. An African safari into the magnificent Northern Serengeti is unforgettable - its unlimited size and grandeur, primordial landscapes, massive populations of plains game on seasonal migration, predatory canines lurking around resident and migratory herbivores, and the Kimondo Camp provides a perfect final base. The camp is well-situated with unimpaired views of the long grass plains into the Masai Mara and the stark Western Escarpment, easy river crossing points and frequent sightings of big cats.

When the migration is on the return from the north to calve on the opposite polar, Kimondo Camp sites itself on the southern sector on the endless grass plains of the Serengeti. It is open from December to March so that guests can spend their wildlife vacation in an unadulterated and peaceful area of the south Serengeti where other game vehicles are rarely seen, and only limited camps exist. Set in a natural hollow within sights of traversing fauna, the camp enjoys unbeatable game viewing for guests who need not move from the shade of a sheltering grove of graceful acacias. The camp is easily accessible, only a 25 minute game viewing drive from the South Kusini Airstrip.

Kimondo Camp is a true jewel in the wilderness, a light canvas tucked in along the acacia trees, blending seamlessly and cleanly into the pristine wildlands of the Serengeti, with minimal environmental impact. The camp is one of the very few in the north Lamai Wedge and south sector region of Serengeti, guaranteeing a secluded and intimate bush holiday experience. Each of the classic styled East African mobile tents has a large king-size bed made out of cast iron, draped with a mosquito net alongside a writing table, open-sided cupboard, veranda, ensuite bathroom with twin basins and shower facilities to ensure maximum comfort.

A large main pavilion tent serves as a dining and relaxing area, including tables, chairs, sofas, and a well-provisioned reference library. Tents can be reserved individually by honeymooners, independent single or couple travelers, family vacationers. Small groups can also exclusively book the whole camp. AfricanMecca guests sleep in a wild ecosystem under the starry illumination of the Lamai night sky without leaving behind the comforts of home. With only nine tents and a focus on bush luxury, the camp represents an intimate, private and elite spot from which to sight larger predators such as lion, leopard, cheetah to smaller carnivores such as wild cat, Common and Spotted Genet, African Civets to many more. Game is plenteous even outside of the migration season, and bird watching is excellent year-round, making the Lamai Wedge an ideal wilderness location for your AfricanMecca experience.

Kimondo Camp is not only a source of breathtaking vistas, it also provides unmatched access to the natural world that creates a very special safari trip for guests of all ages, including one of our planet’s most spectacular natural occurrences, the annual migration of the wildebeest. In this incredible journey of survival, over a million wildebeest and thousands of zebra trek from Tanzania’s Serengeti National Park to Kenya’s Maasai Mara National Reserve. In its true essence, the Masai Mara is the extended portion of the Serengeti ecosystem divided by an imaginary country border unknown to the wildlife. The wildebeest must also meet the challenges of the Maasai Mara, where they are hunted by large carnivores, including the highest concentration of lions in the world within a small dense area, and the wildebeests must fight for their lives as they cross the elongated, piercing jawed crocodile-infested Mara River.

The timing and direction of the migration can vary, depending on weather and grass conditions, but it historically and annually takes place between late July and October in the Lamai Wedge surrounding Kimondo Camp and other parts of northern Serengeti. From the camp, you may watch large cat predators hunt, hear the majestic trumpeting of elephants and experience the nocturnal calls of leopards, hyenas and lions. To add to this comprehensive and unmatched Serengeti trip experience, the camp is also a birdwatcher’s paradise from avi-fauna of prey such as African Fish Eagle, primal vulture to the largest non-flyer such as the ostrich, the heaviest flying bird – the Kori Bustard and many more.

Down in southern Serengeti, December to March is time for an amazing synchronized calving, when the blue wildebeest drop over 500,000 calves. This strategy has evolved to ensure the best possible survival rate, overfacing predators by sheer weight of numbers. Fantastic photo opportunities are presented by the tiny calves staggering to their feet within minutes of birth and by lions, jackals, cheetahs and hyenas snoozing happily with distended stomachs beside the unconcerned herd while birds of prey hover overhead. Other fascinating sights include the rare African painted dog with its huge, round ears, the bat-eared fox and the honey badger, usually spotted in the evening.

Mornings at Kimondo Camp begin with fresh-brewed chai (tea) or coffee, delivered to your tent or served in the dining area. During East Africa’s wildebeest migration, guests can choose a mobile bush breakfast to accompany game tours. Breakfast in the main tent is also an option, featuring a variety of hot and cold morning dishes. Refreshments, lunch, morning and afternoon tea and bush picnics are also offered. Dining is a varied experience, due to the intimacy of the camp. Evenings feature the traditional sundowner, where guests sip drinks around an open campfire overlooking the Lamai Wedge, or stop over at the perfect location facing west, and watch the sun set over the endless plains of the Serengeti. Depending on weather, dinner can be enjoyed beneath the stars, with the echo of instinctive sounds resonating through the bushes of Serengeti.

All meals are made using fresh local harvest sourced from local communities, and dining choices are plentiful for AfricanMecca guests from luscious roasts and BBQ'd red and white meat for the human omnivores to local vegetarian delights for the human herbivores ranging from Ugali/Sima (maize flour - cornmeal), Mchicha (Amaranth Greens), Sukuma Wiki (Collard Greens though the literal translation from Swahili to English is “push the week” as an affordable meal for most East Africans) and many more for the veggie lovers. Specific dietary restrictions from halal, kosher, allergy restrictive or any other diets can be catered for on request. The chefs at Kimondo Camp take great pride in preparing meals that are among the best you will experience while on your tour to Africa. A good selection of wines, beers, spirits, fresh juices, carbonated drinks and other hot, cold, hard and soft beverages are available to accompany your meals. You can also experience a bush dinner cooked on-site and served around the campfire.

Things To Note When Staying At Kimondo Camp 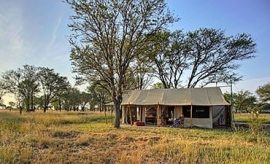 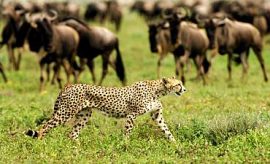 When staying at Kimondo Camp in Serengeti, we recommend combining it with your Northern Tanzania safari to Tarangire, Lake Manyara and Ngorongoro Crater. End your trip with a Swahili cultural tour and beach holiday in Zanzibar.