Are You Planning An African Safari To Gombe In Tanzania? Scroll Down..

GUIDE ON GOMBE BANDAS IN TANZANIA

Gombe Bandas is a government owned, self-catering low-budget rest house accommodation in Gombe Stream National Park, suitable for backpackers and other highly motivated, non-frill adventurers on a primate vacation in Tanzania who do not mind making all their own arrangements from hostel rooming pre-booking, food catering, transport including boat, road and air travel, park fees, insurance for a hostel environment that does have any support structure during emergencies etc. bringing in pressure and uncertainty of travels in this remote part of Africa. Gombe Stream National Park is the smallest in Tanzania, a vulnerable strip of mountainous rainforest on the eastern shore of Lake Tanganyika, famed as a focus for chimpanzee tours in Africa. Chimpanzees are members of the Hominid family, along with mankind, from whom they diverged between four and six million years ago. Much research has been done into similarities between man and his nearest relative, right here in Gombe, by Dame Jane Goodall, world renowned for her work on chimpanzee social behavior and tool making which has spanned more than half a century. Apart from the chimpanzees, the area owes its attraction to its waterfalls, the beauty of Lake Tanganyika’s sandy coastline, fringed with palms and sailed by flotillas of traditional dhows sardine fishing in this 12 million year old deepest of African inland seas. A trip to Gombe overland takes days, or a 3-5 hour chartered AfricanMecca flight from Arusha or Dar Es Salaam followed by a speed boat journey of up to 2 hours or longer on a lake ferry or water taxi. A night in Kigoma is required on arrival or departure depending on your flight times.

In the TANAPA owned Gombe Bandas, there are 8 very basic small rooms with a single or twin bed, bedside table, and there are common sitting and dining areas as well as shared toilets and showers. You are advised to book a room in advance to allow ample time for traveling (view map of Gombe Stream Park to appreciate its remoteness). If arriving by water taxi or coastal ferry, you will probably be crowded by dozens of other local passengers with their goods, crates of fish and commercial cargo. The water can be choppy. But an intrepid globetrotter will enjoy the adventure, if only in retrospect. Each of your activities must be carefully planned and organized. A primate tour to Tanzania is a serious business. Care must be taken to avoid infringing very strict rules in force to protect the chimps, by using the services of a TANAPA guided escort. A Gombe Bandas chimpanzee safari can become an expensive and time-consuming experience without expert advice and guidance. For example, it is wise to allow more than one day to find your chimps as they do not stay in one area and may not always be found in single trek especially during the rains. Also, a night in Kigoma is generally required in case of any last minute flight changes or delays during your arrival and departure. The other is safety and personal well-being of yourself that you have 24 x 7 local support structure for any emergencies that crops up as perfectly and acronymically summed up by Leonardo DiCaprio - “TIA – This is Africa!”, in the movie – Blood Diamond. Generally speaking, a tour in Gombe is an expensive option. Trying to do it on the cheap may not even work. If you are a risk-taker by nature in a territory you are familiar with, you may go ahead. But less reckless AfricanMecca travelers may prefer to budget for a higher expenditure from the outset with safety assurance and peace of mind to stay at the only other accommodation alternative: Gombe Forest Lodge – read more where else to stay in Gombe.

The main attraction of an African primate tour in Gombe is a morning chimpanzee activity trek on a look out for the Kasekela community, one of three chimpanzee communities in the park. There are strict rules for this activity. Chimpanzees are susceptible to human infections and are considered an endangered species, so one must not approach within ten meters of the colony. No-one under fifteen years is permitted on a Gombe chimpanzee safari activity, since children are more prone to carry infection. Mahale has a lower age restriction to 12 years. Flash photography is not allowed as it may annoy the chimps. You will normally spend half a day tracking the community and may not always find them on a single trek as they tend to spend most of their time in the tree canopy and move long distances except in the dry, when they may be easier to find. Once you have found the chimp families, you are only permitted to study their behavior for an hour before returning to camp. Although this group is accustomed to human visitors, it is important to respect their privacy to avoid distorting their social interactions. After lunch, visit to the Jane Goodall Research station with prior authorization before arrival, take to a dhow on the deeps of the lake for swimming, snorkeling or fishing, or take a gentle stroll to one of the spectacular Gombe waterfalls that cascade hundreds of meters down the escarpment face. Your AfricanMecca trip to see the chimpanzees may be exhilarating or oddly, curiously disturbing, but it will certainly be an experience to remember (read more on when is the best time to visit Gombe in western Tanzania).

Food at Gombe Bandas can be a problem for inexperienced trekkers on their chimpanzee primate tour in Tanzania. There is a canteen which serves low cost ethnic dishes at set times, but snacks are not available and it may be advisable to bring your own staples and use the self-catering facilities, which are simple but requires further cleaning. Possible canteen dishes include rice (wali), and rice bread, spicy samosas, maize porridge (ugali), and ndidzi-nyama (plantain with meat relish). Most usual vegetable relishes served with nsima, or maize pearls, are fried okra, and boiled cassava, gourd or spinach. Chick peas and tomatoes are sometimes available subject to local harvest. Coastal dishes with curry or coconut milk are also prominent in the varied but unique culinary repertoire. It is necessary to exercise caution in purchasing ready-made food from unknown cooks geared towards the local palates when you travel in Africa since preparation is not always as hygienic and fastidious for your untamed intestines and stomach as one could wish. For example, salads may be washed in lake water or meat and fish exposed to flies at local canteens. AfricanMecca's safest recommendation is to purchase firm, fresh fruit, wash and peel it, and to drink mineral water, bottled beers and soft drinks. It is not wise to drink local raw alcohol on your self-adventure holiday in Africa, especially palm wine and beers made from pre-chewed and dried cassava root, although there are now proprietary brands of canned cassava beers.

PLACES TO STAY IN GOMBE

Confused and overwhelmed? Read where to stay in Gombe based on Safari Tier Rating 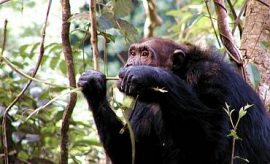 Curious about Gombe? Read more on safari experiences, tour activities, what to do and more

When staying at Gombe Bandas in Gombe Stream National Park, we recommend combining it with your Northern Tanzania safari to Tarangire, Lake Manyara, Ngorongoro Crater and Serengeti (wildebeest migration). End your trip with a Swahili cultural tour and beach holiday in Zanzibar.

You may optionally extend out to offbeat parks in Southern and Western Tanzania such as Selous, Ruaha or Katavi.

ARE YOU PLANNING A CHIMPANZEE PRIMATE SAFARI TO GOMBE IN TANZANIA?

Guide For Lodges & Camps In Gombe

HAVE YOU VISITED GOMBE FOR AN AFRICA PRIMATE SAFARI IN TANZANIA?