Want To Know The Gorilla Families In Volcanoes Park? Scroll Down..

Should you plan a gorilla viewing expedition to Volcanoes National Park, you will learn that the park has 10 resident gorilla families that are habituated to the presence of humans. This means that you can approach the families and spend time with the gorillas without startling them. Permits are necessary for travelers to see them, and your safari consultant at AfricanMecca Safaris will make sure to procure the required document for you.

The Rwandan government issues 80 permits per day, and each group of 8 guests touring the park is assigned a particular family they will be allowed to visit. You will be amazed to learn that each family has specific characteristics that distinguish it from the others. The Kwita Izina baby gorilla naming ritual is part of Rwandan culture and helps monitor and protect each gorilla in the family. 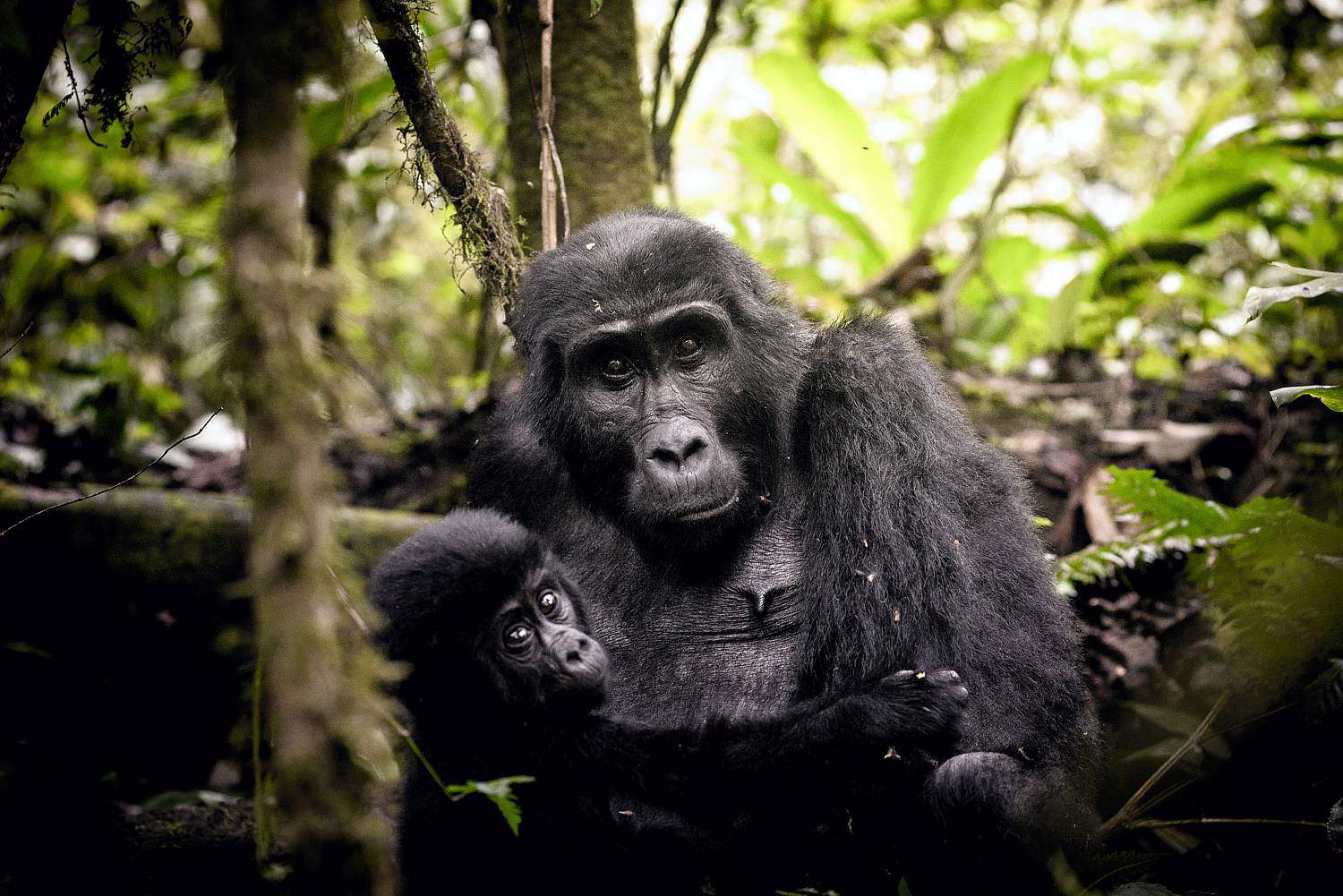 The Susa A group is possibly the best-known family, since this is the one that Dian Fossey studied from 1967 until her death in Rwanda in 1985. The group was originally quite large with 42 members, but it split into two in 2008. The breakaway family was named the Karisimbi group, or Susa B. Susa A typically takes longer to track because the members tend to wander to higher elevations. Although the park trackers locate the family a day before your trip, guests are occasionally barred from tracking this family if the members have moved too far away.

Susa A takes its name from the Susa River, which flows through the group’s territory. It now has 28 members, including 3 silverbacks. A fascinating feature of this family is the presence of twins, named Byishimo and Impano. Rwandan mountain gorilla mothers will generally abandon one of their twins because it is so difficult to care for two, but Nyabitondore chose to care for both the babies despite their playful and boisterous nature. The expert guide overseeing your primate safari might also point out Poppy, a gorilla born in 1976, who is believed to have been a member of Dian Fossey’s research group.

Formed after splitting from the original Susa A group in 2008, the Karisimbi group comprises 14 members led by 1 silverback. If you welcome the challenge of a tough hike, then you will enjoy tracking this group, which lives on the higher slopes of Mount Karisimbi in Volcanoes National Park at heights up to 4507 meters. It could take you some time to get there, as it often requires a full day of hiking to reach the family. Trackers usually locate the group a day before spirited gorilla-seeking vacationers set off on the trek, but you must be prepared for the possibility that they have moved too far away and it is not possible to track them.

Considered the most peaceful group in Volcanoes National Park, the Amahoro group, under the leadership of a silverback named Ubumwe, was named after the Kinyarwanda word for "peace" or "serenity." Ubumwe is known for his congenial nature, which caused him to lose some of his members to another group called Umubano. The Amahoro family lives on the slopes of Mount Bisoke, and active travelers will find that the trek to their home grounds can take time and effort. This group includes 12 members in all: 9 adults i.e. 3 silverbacks, 3 blackbacks, and 2 females. You may also spot 3 juveniles and 1 baby.

The Umubano group was once a part of the Amahoro group. They broke away following a challenge to the head of the Amahoro group, Ubumwe, by a rival silverback named Charles. Trackers in Volcanoes National Park talk about how Charles, having matured into a silverback of the same rank as Ubumwe, refused to take orders from him and constantly fought him for months.

Charles formed his own group named Umubano, the Kinyarwanda word for “living together” or “neighborliness.” Visitors to this group will find it is composed of 12 individuals including 3 silverbacks, 3 blackbacks, 2 females, 3 juveniles, and 1 baby. Since the formation of the new group, gorilla-watchers in the park have noted that the two groups often interact and there is no more animosity between them.

The Sabyinyo group resides in the highlands between Mounts Sabyinyo and Gahinga in Volcanoes National Park. As you will learn on your gorilla safari holiday in the Rwanda, the lead silverback in this group, Guhonda, has taken forceful steps to remain the only alpha male in the family. Those familiar with gorilla behavior know that when a male matures and becomes a silverback, he is often ousted from the group. Such was the fate of Ryango, a rival to Guhonda who was ousted and remains a lonely silverback. At an enormous 220 kg, Guhonda is the largest of all the alpha males in the groups residing in Volcanoes. He leads a group comprised of 16 members.

The Agashya group certainly has the most interesting history of any in Volcanoes National Park. The family was formerly called Group 13 because the family originally had 13 members. It was initially led by an alpha named Nyakarima, however he was defeated in a fierce fight against a challenger, Agashya, a name that means "the news."

Veteran gorilla-watchers recall that Agashya took the time to watch Nykarima and assess his strengths before inciting him to fight. Having defeated the alpha, Agashya took over the entire group. He also traveled to the higher slopes of the mountain with his new family, deliberately making it challenging for the old alpha to follow and track them down. In fact, he still uses this strategy whenever he senses the presence of another silverback that might challenge him.

As the expert tour guide assigned to you will explain, Agashya has consolidated the group by incorporating lone gorillas and the family has grown from 13 to 20 members. In addition to 2 silverbacks and Agashya, you might also meet 5 blackbacks, 5 females, 1 sub-adult female, 1 sub-adult male, 3 juveniles, and 3 babies. It is interesting to note that this group resides on the same slopes of Volcanoes Park as the Sabyinyo group, but its silverback is careful to avoid danger.

Should you choose to track the Kwitonda group while in Rwanda, you are likely to find them wandering on the lower inclines of Mount Muhabura. They do move to the higher elevations at times, so your trek to their location may take longer than expected. Until the founder’s death in 2012, this 29-member group was led by an alpha silverback called Kwitonda, which translates to “humble one.” This cohort is unique because it is a highly migratory group that moved here from the Democratic Republic of Congo. It includes 2 silverbacks, 2 blackbacks, 10 adult females, 1 sub-adult male, 7 juveniles, and 7 babies.

The Hirwa group is led by an alpha silverback named Munyinya. Trackers accompanying tourists report that this group was formed in June 2006, when members of two families broke away from their groups to form a new one. Some of the members originally belonged to the Sabyinyo group, while others came from the Agashya group, also called Group 13.

Since this family was created out of pure luck, their name translates to “lucky one.” Over time, lone gorillas and a twins (born in 2011) also joined the group, and today they are 19 in all. Trekkers are likely to find this group foraging for food in the lower slopes of Mount Sabyinyo, next to Mount Gahinga in Volcanoes National Park. Family members include 1 silverback, 1 blackback, 5 adult females, 1 sub-adult female, 6 juveniles, and 5 babies.

The Ugenda group was named after the Kinyarwanda word for “on the move” or “mobile.” Comprised of 11 members including 2 silverbacks, this group has the unique habit of often moving from one location to another. They do not seem to prefer any particular territory, and this makes tracking them a bit time-consuming. They are likely to be found in the Karisimbi locale of the park.

Visitors are often keen to learn that some members of the Bwenge group were connected with gorillas in the movie about Dian Fossey, Gorillas in the Mist. The cohort takes its name from the former lead alpha silverback, Bwenge, which that means "wisdom" in Kinyarwanda. This group came into being in 2007, when this dominant male moved out of his birth family and created his own, with females from other groups gradually joining him.

While they are now 7 members strong, the family has experienced troubled times and lost 6 of their infants. Trackers in Volcanoes Park noted recently that the troop had two babies. Bwenge sadly died in 2014, and a female adult called Maggie took over as the leader. If this is the group assigned to you, you will likely travel along a trail that runs between the Bisoke and Karisimbi mountains. The trail has a sharp incline and is muddy, and it could take you about 3 hours to reach the site as you scale heights of up to 600 meters.

Other Activities Around Volcanoes National Park

Write A Trip Review On Volcanoes In Rwanda

WHERE TO STAY IN VOLCANOES

In the heart of Africa is a distinctive, mountainous utopia, namely Volcanoes National Park. The rainforests on these highland slopes are home to the endangered mountain gorillas, other primates and fauna.

Many guests who visit Volcanoes National Park to experience gorilla primate trekking pick the drier months, since trails are less muddy and there is less likelihood of getting drenched by an impromptu shower.

When visiting Volcanoes Park for your gorilla safari trek, we recommend combining it it with Akagera, Nyungwe and a city tour of Kigali. You may optionally extend out to other wilderness areas of Gishwati-Mukura ending with a beach vacation at Lake Kivu or even extending out to the exotic spice island of Zanzibar or Lamu, or even Mombasa.

ARE YOU PLANNING TO BOOK AN AFRICAN SAFARI TO VOLCANOES IN RWANDA?

Do You Need Knowledgeable, Experienced & Specialist Guidance For Your Travels In Volcanoes ? Let Us Help Plan Your Trip Itinerary Correctly

Guide For Lodges & Camps In Volcanoes

HAVE YOU VISITED VOLCANOES FOR AN AFRICA SAFARI IN RWANDA?