Are You Planning An African Safari To Mikumi In Tanzania? Scroll Down..

Mikumi Wildlife Camp (formerly known as Kikoboga) is a convenient, basic, and accessible Tanzanian safari accommodation close to the Park Headquarters in the middle of Mikumi National Park in Tanzania. It is not far from the Tanzam Highway for ease of access on African holidays from Dar es Salaam, which does not deter wildlife, including wild pig, jackal, zebra, giraffe, impala, elephant, buffalo, and even lions, from visiting a nearby waterhole, visible from the camp restaurant. Just off the main road from Dar es Salaam on route to either Selous in the South and Ruaha in the West, Mikumi Wildlife Camp overlooks the Mkata flood plains in the distance and is an easy game-viewing drive from two large ever drying hippo pools in the north, where crocodile and wading birds are also much in evidence and herds of up to 300 buffalo have been seen in the dry season. Mikumi National Park is one of the oldest and fourth largest in Tanzania, like the Serengeti with its part rolling grasslands punctuated with acacia, tamarinds, rare palms, and giant baobab trees. The flood plains stretch to northern Uluguru, between the western Udzungwa Mountains and the Rubeho Mountains with their fantastic rocky tors. The North West is the richest area of the park (view map of Mikumi) with more game and a migration corridor between northern Udzungwa and western Mikumi, most popular with AfricanMecca guests on tour in Mikumi. The South East of Mikumi is less easily accessible and game reports are not in abundance, but you may see kudu, baboons, black antelope, tree-climbing lions, and a rare giraffe sub-species.

Mikumi Wildlife Camp has 6 clean, spacious, and comfortable stone built bandas, each with two rooms, suitable for families or groups of four or more people on tour in Africa. Children are welcome (read more on where else to stay in Mikumi on your Tanzanian safari). En-suite bathrooms have hot and cold water, shower, wash basin and flushing toilet, and large bowed verandas overlooking the waterholes with their animal visitors, zebra, impala and buffalo, about 50 meters away. The borehole water is not to be drunk. Bottled water is available for cleaning teeth and drinking. Because the water is so hard, there is no laundry service except for emergencies. Large beds with mosquito nets, cosy armchairs, a writing desk, and fan furnish the bandas. An evening turn down service is an African travel courtesy, available with insecticidal room spray – remind the camp manger of this request on arrival. A well-stocked bar and restaurant shaded by a giant fig tree affords views of the waterholes. There is also a swimming pool, a look-out tower and a gift shop. The restaurant is in a large thatched rondavel with a circular terrace where you may dine indoors or out and game-watch at your leisure. Elephant often drink at the water holes and lion have also been observed in the floodlit surrounding area (read more on AfricanMecca trip ideas for Mikumi). Electricity, is provided by generator, is generally available in the morning from 6.00 to 9.00 a.m., over lunchtime, from 1.00 to 2.00 p.m. and in the evening from 6.00 to 11.00 p.m.

The main activity at Mikumi Wildlife Camp are the twice-daily game viewing drives, conducted by your AfricanMecca guide in a 4x4 vehicle with elevated seating and radio communication for emergencies and for the exchange of news on sightings and tracks (read more on when is the best time to visit Mikumi for an off-beat African safari). Amongst the most coveted sightings are the tree-climbing lions extended along acacia or baobab branches, or the strange giraffe, distinguished by its patterned markings, some thought to be an intermediate species between the Tanzanian Maasai giraffe and the reticulated giraffe. These long-necked creatures, together with their cousins the okapi who are endemic only in Congo, are the only surviving Giraffidae family representatives of  over eight million year old ancestor who emerged from the deepest of the forest to feed on the topmost branches of grassland acacias. Full or multiple day Mikumi Wildlife Camp safari extensions can be arranged to nearby parks, such as Udzungwa Mountains National Park or combined with a few nights to include Selous and Ruaha experiencing its flora, fauna and wild waters of the Rufiji, Great Ruaha, and its sand rivers. You will cross the open grasslands, traverse the forested highlands backed by distant blue mountains of the Great African Rift Valley, the Uluguru and Udzungwa Ranges and the Madzini ridges, traversed by elephant, zebra and buffalo as they migrate seasonally in search of vegetation and water. Misty mornings and fantastically hued sunsets make Mikumi a photographers’ paradise, whilst a delightful variety of over 400 different birds delight the twitcher’s heart. It is a most convenient safari stop over point for a bush and beach vacation in Tanzania.

Food at Mikumi Wildlife Camp is simple, appetizing and filling: soups, roasts, grills and comfort food such as pasta with basil and fresh tomatoes, locally grown. All food is freshly prepared, and, as far as possible, locally sourced. Vegetarian diets are catered for. Special requirements such as decaffeinated coffee are not easily available on tour in Tanzania, so AfricanMecca guests are reminded to bring their own while this camp. Most visitors take an early cup of tea or coffee before a morning game drive, perhaps to the hippo pools, arriving there about 7 a.m. in time to see herds of buffalo compete for their first drink of the day. On returning they may relax and enjoy brunch. An extended buffet allows families on safari with young children flexible dining options before taking a well-earned siesta and setting out again on a late afternoon game driving Mikumi tour, to the spectacular rock formations of the mountains or the endless golden grasslands, frequented by hundreds of humped wildebeest and impalas, the males proudly lifting their impressive screw-threaded lyre-shaped horns. Evening sundowners, exemplary of an African safari shutdown, in the shaded bar built around the central fig tree, are followed by a set dinner and an evening yarning around a blazing fire in the Maasai style stockaded boma. For special occasions, such as an anniversary or birthday, the friendly staff will arrange a more festive menu presentation.

PLACES TO STAY IN MIKUMI

Confused and overwhelmed? Read where to stay in Mikumi based on Safari Tier Rating 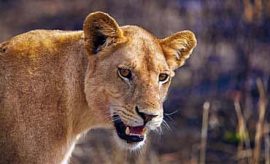 Curious about Mikumi? Read more on safari experiences, tour activities, what to do and more

When staying at Mikumi Wildlife Camp in Mikumi, we recommend combining it with offbeat parks in Southern and Western Tanzania such as Selous, Ruaha or Katavi ending with a chimpanzee trekking safari at Gombe or Mahale.

You may optionally extend out to Northern Tanzania safari parks such as Tarangire, Lake Manyara, Ngorongoro Crater and Serengeti (wildebeest migration). End your trip with a Swahili cultural tour and beach holiday in Zanzibar.

ARE YOU PLANNING TO BOOK AN AFRICAN SAFARI TO MIKUMI IN TANZANIA?

Guide For Lodges & Camps In Mikumi

HAVE YOU VISITED MIKUMI FOR AN AFRICA SAFARI IN TANZANIA?