Are You Planning An African Safari To Ruaha In Tanzania? Scroll Down..

If you are planning a value self-drive safari in Africa, you better do it soon at Tandala Tented Camp. The camp is located 30 minutes’ drive from the park gate - around 6 kilometers east of the largest, wildest and one of the most isolated national park in Tanzania – Ruaha. Tandala is an unpretentious camp run by the owners -- the Fliakos who are passionate about the Ruaha wilderness. The camp is more affordable than most accommodations actually within the national park itself. A Tandala Tented Camp safari has a multi-range of permitted activities, including game drives, walking safaris and visits to Mbomipa Village. Tandala is acutely involved in development projects to benefit the village and involves local people in wildlife conservation. They are an integral part of the cultural activities at Tandala Tented Camp. Tandala is the Swahili name for both the Greater and the Lesser Kudu. The rare and magnificent Greater Kudu with its wide spiral horns is often seen in the area. An adventurous Tanzanian vacation with AfricanMecca in Ruaha National Park introduces you to unspoiled landscapes compared to the prime northern parks such as the Serengeti, Tarangire, Lake Manyara and Ngorongoro. The Ruaha virgin landscapes - permanent water and sand rivers, forest and grasslands, highlands and valley - are threatened by modern pressures, as are the many wonderful animals protected within its borders. However, within the national park, an area of over 20,000 square kilometers which is larger than Slovenia, the animals are safe, at least for now.

11 widely separated, comfortable and airy tents with bathrooms attached, enclosed in thatch veranda panels and canvas walls, are pitched on safely raised decking, three meters above the sandy campgrounds (read more on where else to stay in Ruaha Tanzania). These are wonderful vantage points accessed by wooden staircases. In the morning, the Mdweka sand river, partly visible from your thatch-shaded verandah, is sometimes visited by packs of African wild dogs, threatened with extinction because of their need for vast hunting ranges. In the evenings, the two nearby waterholes attract some of the area’s herds of elephants. Sometimes, you can even see these large tuskers fascinated with the camp’s swimming pool and attempt to drink from it. The impressive open–sided railed central lodge houses a large dining room and comprehensively stocked bar between monolithic baobab trees amidst woodland acacia. Next to it lays an elevated swimming pool with paved surround. The spacious lounge is furnished Colonial style with enormous sofas and a billiard table, offering an unusual leisure play feature not often found on safari tours in Tanzania. Tandala could definitely do without it! Other than that, simple, intimate Tandala Camp has a family feeling and is environmentally friendly, using solar energy for lighting and hot water. The staff are charming and helpful, wanting only to provide you with the best African safari experience of your life without any frills of deluxe or luxury camp experience. Families on their African safari with young children are welcome but needs attention of parents at all times. Board and card games are available in the lounge. Staff security escort AfricanMecca guests safely about the camp. Do not attempt to move around on your own as the camp is unfenced.

A special feature of a Tanzanian tour based at Tandala Camp is the chance to visit Mbomipa Village to meet local people, visit an authentic ethnic homestead, purchase beadwork souvenirs or watch cultural displays of dance and song. Ruaha walking trails, terrestrial game driving excursions and colorful bird-watching safaris are ways to lose yourself in the wonder of travel in Africa, best between June and October when water sources are drying up, the savannah is dry golden and empty of human life as it was before the explorer came. Tandala Camp also offers game drives on fly-in itinerary with on-board radios used by your guide to share information on accessible happenings inside the largely unexplored and lesser frequented Ruaha National Park. With your expert Ruaha guide, you will trail down stalking lions hunting down wildebeests and buffaloes to mighty elephants foraging in the woodlands (read more on when is the best time to visit Ruaha on an AfricanMecca trip). With over 570 species of resident and migratory birds already identified and more to be found, Ruaha is a magical place for birdwatchers. Thirteen species of herons and egrets, eight species of storks, ibis, spoonbills and many other waders as well as fish eagles and osprey are found by the rivers, while fifty-three species of raptors prey on smaller birds, mammals and snakes. Standard visits to hippo and crocodile pools are varied by trips following the historic routes of Arab traders, Chief Mkwawa, and early voyagers like Spekes and Burton. Standing at Isimila’s Stone Age pillars near Iringa town on the way to Ruaha, there is nothing in sight to distract you from a deep, spiritual awareness of the way things once were and will never be again.

Dining at Tandala Tented Camp is a delightful aspect of your African tour. Proportions are generous and the cuisine is simple but tasty and adventurous, combining European and East African dishes with skillful the methods of preparation. Full board is inclusive of three meals and is the preferred option. Breakfast can be eaten in the main lodge dining area, where you will be offered a choice of fresh fruits, hot breads, toast and honey or jam, or a full English breakfast of eggs, bacon and sausage, with milk or fruit juice to drink as well as fine tea or coffee grown in Tanzania. A morning excursion could include lunch in the bush on completion. Close by the camp, you can take a guided Tanzanian safari walk as part of your AfricanMecca itinerary to see the homely warthogs, straight out of Lion King’s character “Pumba”, and dik-diks – the tiniest antelope, not to mention playful mongooses, and also aggressive baboons, who are intelligent and courageous primates who will work together in defense of their young to face off a pride of hungry lions. Two course luncheons can be eaten in camp or taken further afield. A full day on tour in Ruaha National Park will include a sandwich picnic lunch served on the hood bonnet of your 4x4 safari vehicle. Sundowners in the bush or by the campfire lead up to a three-course candlelit dinner in the courtyard, after which you will be taken back to your tent by staff security armed with sticks, spears and bearing flashlights.

PLACES TO STAY IN RUAHA

Confused and overwhelmed? Read where to stay in Ruaha based on Safari Tier Rating 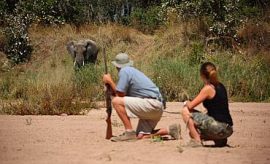 Curious about Ruaha? Read more on safari experiences, tour activities, what to do and more

When staying at Tandala Tented Camp in Ruaha, we recommend combining it with offbeat parks in Southern and Western Tanzania such as Selous or Katavi ending with a chimpanzee trekking safari at Gombe or Mahale.

You may optionally extend out to Northern Tanzania safari parks such as Tarangire, Lake Manyara, Ngorongoro Crater and Serengeti (wildebeest migration). End your trip with a Swahili cultural tour and beach holiday in Zanzibar.

ARE YOU PLANNING TO BOOK AN AFRICAN SAFARI TO RUAHA IN TANZANIA?

Guide For Lodges & Camps In Ruaha

HAVE YOU VISITED RUAHA FOR AN AFRICA SAFARI IN TANZANIA?