Are You Planning An African Safari To Katavi In Tanzania? Scroll Down..

In the heart of the Africa’s most inaccessible unspoiled wilderness, there is a scarce safari lodge preferred by AfricanMecca guests. Katuma Bush Lodge, designed by Mbali Mbali, detracts as little as possible from the beauty of its surroundings in the little-known Katavi National Park in Western Tanzania, blending into a fringe of miombo woodland, overlooking the endless Katisunga flood plain sourced from the Katuma River where incredible numbers of hoofed and horned mammals congregate in the dry season, followed by trailing carnivores. They are only part of the unbelievable richness of a pristine Tanzanian vacation in this less exposed corner of old Africa which is alive with predators accustomed to easy living as well as fiercely competitive crocodiles and hippopotami tussling for a place in the mud, not to mention the patient elephants who gather by the hundred as seasonal Lake Katisunga shrinks to leave only cracked clay soil on the banks of the Katuma River. Katavi National Park, over 4400 square kilometers of brachystegia woodland surrounding three seasonal lakes, changes so much from the wet season to the dry, that it might well appear to offer authentic and dynamic African holidays in two different worlds. In the wet, it is a charming and idyllic haunt of large numbers of mammals and a great diversity of birds, butterflies and wild flowers. In the dry, it is a primeval battleground, where the same mammals dare and die to access the precious water they need to survive.

Katuma Bush Lodge is a paradoxical combination of commodious comfort and minimalism, ostensibly a base for an unbeatable Tanzanian safari experience with AfricanMecca but really best suited to experienced hands with some idea of what to expect. At least a two day journey by road from Arusha used by self-drive overlanders with a 15-18 hours’ drive via Tabora covering over 1100 km, or a convenient 3 hours or slightly more by a small charter aircraft from Arusha. Katuma Bush Lodge consists of 10 widely spaced hybrid chalets: solidly built stilted decks supporting permanent canvas tented bandas under an uncommon corrugated roof. All have large private verandahs accessed by a sturdy flight of railed wooden stairs and are so far apart that you will feel isolated in an unspoiled, natural wonderland. It is more of a value camp, but less of a deluxe lodge as far its rooms are concerned. Shaded by tamarind trees supporting a population of monkeys and bush babies, it boasts a grand central lodge area with towering thatched, oval conical roof, raised on an extensive deck (read more on where else to stay in Katavi National Park). A large dining area, small swimming pool and lesser bar complete the amenities, and there is surprisingly a cell phone network and Wi-Fi reception for a connected tour accommodation in Africa in a disconnect natural world. Each of the unexpectedly richly furnished bandas has an en-suite bathroom featuring flush toilet, vanity unit and shower with constant hot and cold water. From elevated verandahs, far-reaching grassland can be seen with its burden of wildlife hordes. Glorious sunsets flame over the twilight plains. At night, your proximity to nature in the raw is emphasized by the roar of lions, trumpeting of elephants and stampede thunders of buffaloes.

The sheer density of mammalian life on the Katisunga flood plains on your Katuma Bush Lodge safari will make it impossible to miss most of the stars of African travel in the annual drama that is life in Katavi, named for the native hunter, Katabi, whose spirit is said to haunt an ancient tamarind tree, where suppliants still leave gifts in return for blessings. African safari game walks with armed guards and game drives by jeep with 2-way radio communication ensure your safety in an area where “wild-life” are unaccustomed to human beings since people are even rarer than cheetahs (read more on when is the best time to visit Katavi for an off-beat African safari). These cheetahs were thought to have vanished from Katavi, but a mother and her cubs have been seen here as well as rare antelopes, a pack of wild dogs and an unusual small zebra subspecies, Grant’s zebra, which goes to drink at night, the male being first to water and last to leave, turning to look behind for threats as he herds his harem back to pasture. Fly camping is the definitive activity on tour in Katavi, and only available on a special request prior to arrival via AfricanMecca. The landscape, unchanged for hundreds of years, quickly exerts its spell over the foot-weary explorer, isolating him in an earlier age and stripping away the civilized veneer until the free spirit exerts itself and modern man and woman return to the unbound innocence and simplicity of the Garden of Eden.

Food at Katuma Bush Lodge is tasty and filling international cuisine with a local Tanzania flair, usually served in the dining hall or outdoors, except for the last night of your visit, when you are invited to a “nyama choma” chargrill as an iconic Tanzanian tour farewell. After early morning tea or coffee served on your balcony, it is usual to set out on a Katuma Bush Lodge safari in time to see the vast herds moving to water in the cooler part of the day before the sun beats down mercilessly on the plains and all self-respecting mammals snooze in the shade of the surrounding forest (view map of the Katavi wilderness). Your custom built jeep has a sunshade roof and on-board refreshments to sustain you until your return to camp for lunch which consists of a variety of dishes accompanied by fruit juice or cordials. Take a siesta before another adventure in the late afternoon, possibly a closer view of pods of hippos crowding into an already overpopulated wallow. Hippo usually stay submerged during the day, but here they graze on the plains, protected by a blood-like natural varnish which keeps their skin flexible and moist. Evening game drives are popular since a number of nocturnal animals wander the surrounding trails. On recent fantastic AfricanMecca trips to Katavi, leopards have been seen defending their kill from marauding hyenas. Sundowner drinks, on the plains, in the bar or around the camp fire stimulate your appetite for a well-presented dinner in the refurbished mess hall, or outside, on the swimming pool deck, under a canopy of stars and possibly a bright moon. 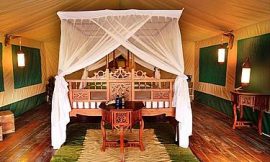 PLACES TO STAY IN KATAVI

Confused and overwhelmed? Read where to stay in Katavi based on Safari Tier Rating 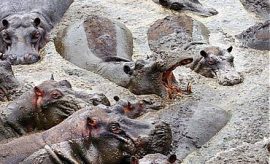 Curious about Katavi? Read more on safari experiences, tour activities, what to do and more

When staying at Katuma Bush Lodge in Katavi, we recommend combining it with your Northern Tanzania safari to Tarangire, Lake Manyara, Ngorongoro Crater and Serengeti (wildebeest migration). End your trip with a Swahili cultural tour and beach holiday in Zanzibar.

You may optionally extend out to offbeat parks in Southern and Western Tanzania such as Selous or Ruaha ending with a chimpanzee trekking safari at Gombe or Mahale by the relaxing Lake Tanganyika.

ARE YOU PLANNING TO BOOK AN AFRICAN SAFARI TO KATAVI IN TANZANIA?

Guide For Lodges & Camps In Katavi

HAVE YOU VISITED KATAVI FOR AN AFRICA SAFARI IN TANZANIA?